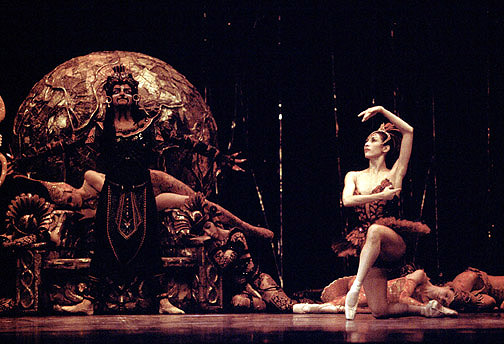 Barbarians at the Gate

On Thursday, April 5th, 2012 at 6:00 p.m., a multimedia presentation entitled Barbarians at the Gate – Stravinsky, Diaghilev & the Ballets Russes, narrated by Tom Maguire, will be offered free to the general public at the Performance Space at La Tienda at 7 Caliente Road in Eldorado. This event is presented by Destiny Allison Fine Art as part of the salon series: Art in the 21st Century.

This presentation will offer a detailed look at the time between the first season of Serge Diaghilev’s Ballets Russes in 1909 and Diaghilev’s death in Venice two decades later.  Mr. Maguire will examine the artistic forces and personalities that forged a reinvigoration of the art of ballet.  The presentation will also explore the effect that the visual artists, composers, librettists, choreographers, dancers and designers associated with the Ballets Russes had, not only on that organization, but also on their own art forms and the cultural life of Europe in general.  The presentation will concentrate on the work of composers Stravinsky, Ravel, Milhaud, Satie, Debussy and Prokofiev; visual artists Benois, Picasso, Rouault, Gris, Picabia, Bakst and Braque and choreographers Fokine, Massine, Nijinsky, Nijinska and Balanchine.  These artists and their influence on the artistic life of Europe, in general, and Paris, in particular, will be chronicled; along with the aristocrats, members of high society and the business class, donors and sponsors who made their work possible.

Mr. Maguire augments the research he has done on the Ballets Russes with material gleaned from the most recent publications on the subject.  Visual and musical materials are selected from several sources including Mr. Maguire’s extensive collection. Barbarians at the Gate dramatically explores the artistic explosion that Serge Diaghilev unleashed on Western Europe as he brought; first visual arts, then opera and finally ballet from mother Russia to the salons and theatres of Paris.  In stunning visuals accompanied by music clips, Barbarians at the Gate traces not only the history of the company, but also its effect on all of the arts in the early 20th century.

The Ballets Russes:  An Audio-Visual Presentation

April 7th you’re invited to enjoy The Best Live Comedy!TM   At The Performance Space 7 Caliente Rd, Santa Fe, NM Located just 15 minutes from downtown Santa Fe, The Performance Space has ample parking and is conveniently nestled inside La Plancha de Eldorado, one of Santa Fe’s best restaurants! Food and drinks are available before and during this special event from La Plancha de Eldorado.

This mostly clean comedy event is part of The Best Live Comedy!TM  PG-13 Tour starring The Comediologist, Eddie Tatoya PhD. Is a professor of American Literature and Creative Writing at Highlands University, Las   Vegas, NM. Author of, “The Legacy of the Wisecrack; Stand Up Comedy as the Great American Literary Form” and “Icons of African-American Comedy.” Native of Albuquerque he’s been on MY50TV and featured on TV’s “After After Party with Steven Michael Quezada and The James Douglas Show!” In 2011, Eddie was voted “Funniest Comedian in New Mexico” by New Mexico’s other comedians. He plays clubs thru out the South West.

One response to “Upcoming Events”