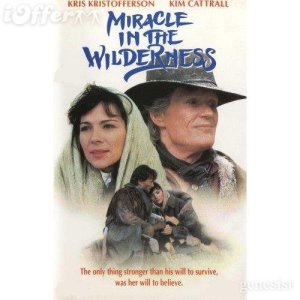 On Thursday, December 11, at 6.30 pm, (PLEASE NOTE EARLY START TIME)  REEL NEW MEXICO will present the only Christmas themed feature film ever shot in New Mexico at the Performance Space at La Tienda in Eldorado, along with a special surprise holiday treat- a screening (at least in part) of am Emmy nominated but slightly cheesy holiday television special shot in Santa Fe and Lamy in the late 70’s, featuring some very well known singers and performers of the time.  It is great fun and we’ll not tell you who the guests performers are!

MIRACLE IN THE WILDERNESS (1992, 88 minutes, filmed in northern New Mexico, in the Santa Fe Nat’l Forest and on Johnson Mesa)– Miracle in the Wilderness is a Christmas drama based on the novella by Paul Gallico in which a frontier woman tells her story of Christmas to the leader of the Blackfoot people who have kidnapped her family. As she speaks, he envisions the story as it would occur in American Indian tradition.

The film takes a very unique and interesting look at a traditional Christmas story and allows viewers to see how other people may view one’s personal beliefs.

You are now able to order and bring food and drink from La Plancha and enjoy it in the Performance Space, offering a casual dinner and a movie type event.

The $5 suggested donation/admission at the door will go for expenses and to bring in filmmakers for other screenings.

Screening on Thursday, January 8, 2015- ‘Mother O’Keeffe’, narrated by former New Mexico resident, Marsha Mason and produced and directed by fellow El Dorado resident, Richard Startzman.  This film is one hour long and was released in 2007 and offers a very different look at artist Georgia O’Keeffe.

For more information, please contact Jeff Berg at 466-1634 or at nedludd76@hotmail.com

Upstart Crows of Santa Fe – a fledgling company of young actors collaborating on productions of Shakespeare’s plays – present their first performance of scenes from Twelfth Night, at The Performance Space on Friday, December 19th at 7 p.m.

The cast of three actors and their director, Anna Farkas, make Shakespeare’s comedy come to life with music, stage-fighting, and  the Bard’s unmatchable language.

Twelfth Night  is a comedy about mistaken identity, in which a young woman dresses as a young man in order to be close to the count she adores, only to be pursued by the woman he loves. The cast includes an ensemble of foolish characters such as Sir Toby Belch, Sir Andrew Aguecheek, and the pompous Malvolio.  The cast performs many roles through quick changes which allows the actors to take turns performing all of the parts in different scenes.

This will be the Crow’s first production in Santa Fe, though the director and founder has over a decade’s experience bringing classic theater to the stage with young actors in Madison, Wisconsin.. The group is a non-profit Shakespeare program for young people age 11-18 whose mission is to help Santa Fe youth experience these immortal plays first-hand, exploring Shakespeare’s language and meaning with the help of experienced directors. There are no auditions to join – all that is needed is a desire to participate and engage in the rehearsal process. The program connects young people to some of the greatest writing the human race has produced while fostering an atmosphere of creativity and enjoyment. It’s an amazing mix of fun and accomplishment and we’re eager to share it with you. 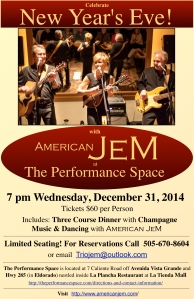 Come enjoy the intimate setting, and great acoustics of The Performance Space on New Year’s Eve with American JeM and La Plancha Restaurant.  Music, more music, a three-course dinner with Champagne, decorations, and dancing to ring in 2015 ($60 per person). Reservations Required.

The Performance Space will be THE PLACE TO BE on New Year’s Eve with American JeM, Chef Juan Carlos and his delighful and efficient La Plancha wait staff who will be serving: